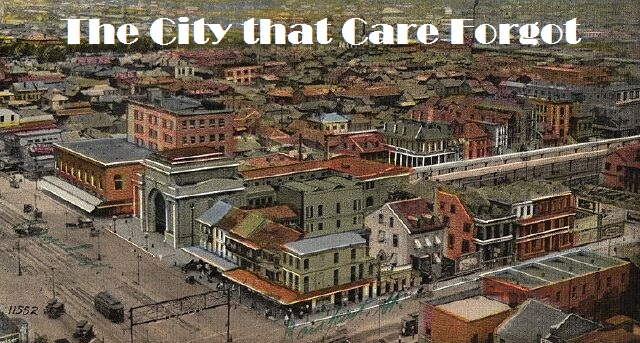 New Orleans, LA is a city of many names. The Crescent City, The Big Easy, The City That Care Forgot. Founded from the sweat of convict slave labor, New Orleans has always been a singular town. A city of stark contrasts, it's weathered it's share of storms, both natural and social. And if there's anything for certain in this town, more storms are always coming.

In 1930, American is in the grips of the Great Depression and New Orleans is no exception. Unemployment is rife, especially in the lower wards, but the city's reliance on trade helps insulate it's residents from the worst the Depression has to offer. While Prohibition is the law of the land, New Orleans is infamous for it's ready availability to booze, be it rum from the islands, wine from Europe, or whiskey from the mafia. While moral authorities decry it's existence, Storyville, the city's legendary Red Light District is open for business. Public nudity is illegal, so sex workers dance behind sheer curtains, backlighting throwing sensual shadows that advertise their wares. With so much poverty, booze, and sin, it's only natural that crime and corruption would be rife. Finding an honest cop in New Orleans is as likely as seeing a unicorn on Bourbon Street. Rival underworld factions wage a shadowy war for the wealth flowing into and out of the city, while crooked politicians do the same.

New Orleans is a city of mystery. Secret Societies called 'Krewes' work toward their own aims, be they good or evil. Catholicism and African Mysticism have blended together to form New Orleans Voodoo, largely misunderstood by other magic wielders. Ever since the arrival of the original Coffin Girls, vampires have been a mainstay of the city, preying on the transient and poor populations while mingling with the social elite. Both Summer and Winter fae adore how the city is filled with music, art, food, and desperate souls ready to make bargains. Outside the city is the Bayou, a swampy world unto itself where alligators are among the least of one's worries.

In the midst of all this are our heroes, members of the mythical House of the Rising Sun, a supper club for those who know of the supernatural world. Accorded Neutral Ground, the House is one of the few integrated businesses in America, much less New Orleans. Skin color just doesn't seem to matter as much when you're dining with someone who might not even be human.

A storm is coming, and it's up to our heroes to stand against it.

The City That Care Forgot Comments

I'm sorry, but we no longer support this web browser. Please upgrade your browser or install Chrome or Firefox to enjoy the full functionality of this site.